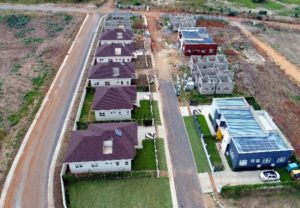 GHL Bank (formerly Ghana Home Loans), the largest mortgage finance institution in Ghana, has launched two key initiatives to broaden their social impact in Ghana. They have partnered with Rendeavour in an initiative to build affordable housing, and with IFC to encourage green building.
The partnership with Rendeavour, an Appolonia City developer, is a pilot project to build 100 affordable homes. The partnership will ultimately extend the project to build 2 000 affordable homes. Ghana currently faces a significant housing deficit, which is estimated to be approximately 1.7 million (note that Ghana’s population is approximately 29 million). The key barriers to homeownership are the price of housing in an environment where demand significantly exceeds supply, and the lack of access to financing. Through this project, GHL Bank will play its part in addressing the housing crisis in Ghana.
GHL Bank has also embarked on a separate partnership with IFC, which is part of IFC’s broader Excellence in Design for Greater Efficiencies (“EDGE”) programme. The aim of the programme is to encourage construction to move towards more resource-efficient building projects. According to Mr. Dennis Papa Odenyi Quansah, a consultant with EDGE Africa Implementation, “EDGE includes complimentary software to empower building professionals to quickly and easily determine the most cost-effective ways to build green, based on occupant behaviour, building type and the local climate.” According to GHL Bank’s COO, Mr. Kojo Addo-Kufour, the next step would be for GHL Bank to issue green bonds to finance environmentally-friendly construction methods at competitive rates. GHL Bank is the first to commit to the EDGE programme in Ghana.
At the end of 2016, GHL transitioned from a mortgage bank to a universal bank. Verdant Capital is mandated by GHL Bank to raise funding for the expansion of its loan book.

Send Us Your Feedback