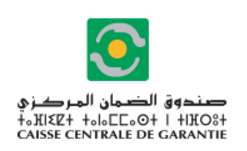 Caisse Centrale de Garantie (“CCG”) based in Morocco won the “Financial Inclusion” trophy hosted at the African Banker Awards 2017, organized on the side-lines of the annual meetings of the African Development Bank (“AfDB”) held in Ahmedabad, India. Such an award recognizes CCG’s commitment and successful strategy in terms of financial inclusion with a demonstrated impact on improving access to financing for MSMEs and low-income individuals.
Established in 1949, the CCG is a public financial institution, which is assimilated to a credit institution under the banking law. The CCG is administered by a Board of Directors chaired by the Minister of the Economy and Finance and composed of various ministerial departments and the private sector represented by the Moroccan Banking Association “GPBM”, the General Confederation of Morocco “CGEM” and the federations of the professional chambers (Commerce, Industry and Services, Agriculture and Handicrafts).
In the period 2013-2016, the CCG has benefited close to 18 000 MSMEs and more than 112 000 households, with an additional 80% of newly-funded clients. Currently, the institution has eight centers in the cities of Tangiers, Agadir, Marrakesh, Oujda, Casablanca, Fez, Laayoune and Rabat.
The CCG’s strategy aims to provide suitable solutions for financing both enterprises and individuals and serve as a privileged policy instrument for the economic and social development of the country. The institution’s strategic priorities include: (i) playing a major role in improving MSMEs access to financing; (ii) supporting financing for start-ups and innovation; and improving individuals’ access to financing.
The conclusion is that financial inclusion or reducing financial exclusion, is an important part of human development in Africa. However, financial exclusion presents opportunities business can exploit to close the such gaps. Verdant Capital has previously identified four main themes as the driving forces behind financial inclusion in the continent. These are (i) technological change, (ii) adoption of best practice, (iii) the broadening of wholesale funding markets available to the lending institutions on the group, and (iv) finally, financial inclusion has become a mainstream segment for a broad range of market participants such as private equity, and mergers & acquisition (M&A) advisors. Verdant Capital was also nominated for the financial inclusion award but finished a runner-up.